Since the late 70s, automakers all over the world have been pursuing the Holy Grail of the auto industry: the Homogeneous Charge Compression Ignition (HCCI) concept that would drastically reduce emissions and increase fuel economy. In other words, it’s a gas engine that runs like a diesel engine when a lot of power isn’t needed.

It’s such a great way to cut pollution and improve fuel efficiency that many automakers - including Mercedes-Benz, Volkswagen, and Honda - have spent the last 40 years trying to figure out how to bring the concept to fruition. Many gave up, but Mazda kept going…

And they finally figured it out. They announced that they created the world’s first production HCCI engine, which they have dubbed SkyActiv-X. If you have some time to kill, you can watch the announcement, which starts at the 24:52 mark. (The announcement was made in Japanese, but it has subtitles).

The concept of the HCCI engine offers a lot of benefits, the most notable one being that its emissions would be so low that it wouldn’t even need a catalytic converter.

The low emissions can be attributed to the HCCI engine’s low-temperature, flameless nature that would be achieved by mixing the fuel and air so well that combustion could happen simultaneously at multiple points within the cylinder’s volume when the mixture is compressed. The mixture would burn more evenly at a lower temperature. That means fewer particles or nitrogen oxides coming out of the exhaust pipe.

The concept was well beyond 1970s technology, which is why it's taken so long to bring to life. Controlling the fuel/air mixture so well that it could combust on its own upon compression was nearly impossible to pull off until now. Engineers in the 70s also had a hard time figuring out how to operate an HCCI engine in idle mode, as HCCI engines were supposed to operate in a semi-chaotic state at all times.

Obviously, technology has come a long way in the past 40 years. Today’s computers and advanced engine valve control systems have made it possible to control HCCI combustion. Thanks to Mazda, we can see and touch an actual HCCI motor for the first time in history.

We should clarify that SkyActiv-X isn’t a pure HCCI motor. Rather, it’s a hybrid. There are still spark plugs that allow conventional spark ignition to kick in during certain conditions, such as when:

It’ll transition right back into an HCCI engine when the engine either no longer requires much power or falls back into the acceptable temperature range.

Even though the SkyActiv-X is technically an HCCI motor, Mazda is calling it a “spark controlled compression ignition” engine, perhaps to clear up some confusion. SkyActiv-X is supercharged, so it delivers more torque than the current Mazda gasoline-powered engine. It’s cleaner and more efficient, too.

Mazda developed their radical new engine to bring them one step closer to their “Sustainable Zoom-Zoom 2030” vision, which is to drastically reduce carbon emissions by 2030. The plan involves developing the perfect internal combustion engine with effective electrification technology. Looks like they're more than halfway there.

What To Expect From SkyActiv-X

The SkyActiv-X is far superior to Mazda’s current generation of gasoline direct-injection SkyActiv engines, which is saying a lot because those are already superior engines. Besides the cutting-edge HCCI technology, the new SkyActiv engine boasts: 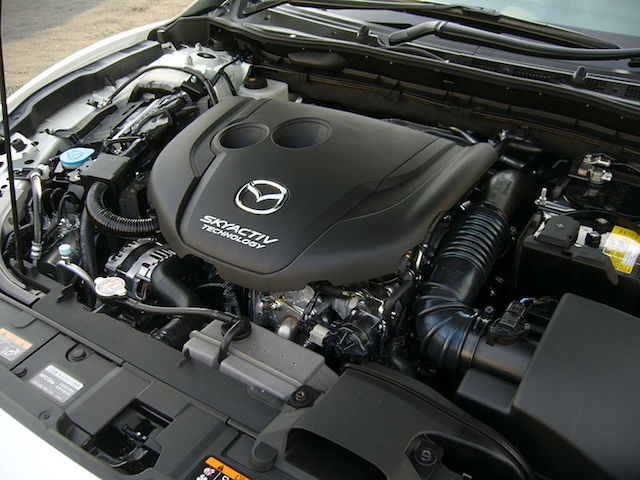 Will SkyActiv-X look like its predecessors (one of which is pictured above), or will it have a more compact design? Photo credit: CEFICEFI

When SkyActiv-X Will Hit The Roads

Mazda officially announced that they’ll unveil SkyActiv-X in 2019, but they didn’t specify which production vehicle(s) the revolutionary engine would power. We’re guessing the Mazda 3 if they decide to revise it for the 2019 lineup.

We’re really excited to see the world’s first HCCI motor in action. We’re also looking forward to the day we find out which vehicle(s) it’ll power because these cars will very likely become one of the most coveted classic Mazdas of our time.