While other manufacturers are rushing to spend money creating hybrid or battery-powered electric vehicles, Mazda has sidestepped the crowd and worked hard to increase the efficiency of their internal combustion engines. Dubbed “Skyactiv”, their strategy encompasses the entire chassis, body, and transmission into their plan. Not only are they reaching to achieve a better fuel mileage to appease both the consumers and the government, but they are working to improve the technology that will allow them to achieve a global 30 percent improvement in fuel economy using the old fashioned internal combustion engine.

The entire plan still begins with both the gas and diesel-powered engine and will eventually cross over into the electric vehicle frontier. But for now, Mazda's concentration on the internal combustion engine gives developers time to design and build an electric vehicle that is affordable and convenient for the consumer (currently, most electric cars aren't terribly convenient or they aren't affordable...or both).

Mazda's 155-HP 2.0L Skyactiv gas engine, for example, uses 15 percent less fuel than the previous 2.0L, making it quite comparable to a similarly sized diesel (a feat of engineering considering that diesels are inherently more efficient than gas-powered engines). But the fuel economy improvement doesn't come at the expense of performance, as the Skyactiv 2.0L's torque actually increased in the low to mid RPM range, improving about 15 percent.

How Do You Make An Engine More Powerful AND More Efficient?

When you see that an engine has become more powerful AND more efficient, it's a safe bet that some clever engineering has occurred. Here's what Mazda's engineers did to accomplish this amazing feat:

3. They developed a revolutionary 4-2-1 exhaust manifold that allows the engine to run lean without knocking, which helps to make the high compression ratio possible.

It's All About The Compression 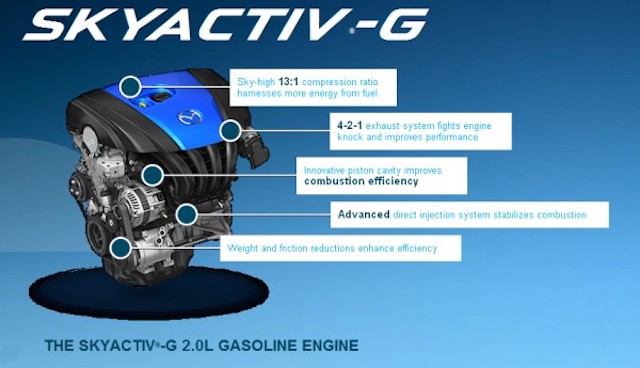 Long before the Skyactiv program was born, the 13:1 compression ratio was already being developed as Mazda looked at how to improve upon the combustion process. They learned to ignore what they thought they knew about the combustion engine and looked at the technology that they had available to them today. They knew that knock was attributed to high temperatures, and that was never going to change, but in order to use the higher ratio, they had to find a way to cool the cylinder intake charge.

They sought to lower the fresh air temperature much like race engines do by pushing out all the exhaust possible before drawing a new breath. Mazda used their cam timing to completely get rid of all the hot exhaust before drawing in cool air charge. They coupled this with the 4-2-1 exhaust manifold that allowed them to get every bit of exhaust from the cylinder before the next pulse. The downside was the length of the manifold moved the catalyst so far away that the emissions rose during startup because they could not accomplish the lighting quickly.

They turned to their direct injection to help them solve that problem. Because direct injection is sprayed into the combustion chamber, they can get a higher compression ratio due to the fine spray that is easier to cool. This is essential to the cold start since they get an easily ignitable stratified charge. It starts with the rich mixture by the spark plug and then ignites the lean mixture. This can be done due to a fast delayed ignition where a little fuel is injected during the intake stroke and a bit more at compression. This makes it very stable and offers delayed ignition to a cold start.

Mazda figured out that the later they ignite the fuel, the later it continues to burn, making it really hot as it goes out the exhaust. They have a retarded ignition timing for the first 15 seconds in order to create much more heat for the catalyst. Another factor contributing to the efficiency is the fact that it cruises with the throttle open when it has light loads. In their effort to get the Atkinson Cycle, they use the Mazda Miller Cycle to get there.

Mazda is clearly still working on the compression ratios because they have experimented with 15:1 and 18:1. They are striving for a merging of the diesel and the gas-powered engine in order to produce one compression ratio, and they may be close since both their gas and their diesel engines are at 14:1 compression. They say it is coincidental.

While Mazda will need to start offering electric vehicles and/or electric hybrids at some point - new US federal emissions rules all but require these vehicles to be produced in the next decade or so - Mazda's revolutionary Skyactiv technology should allow the automaker to continue to meet fuel emissions for many, many years. This gives Mazda an advantage over other manufacturers who stopped trying to invent a better gas engine and instead put all their efforts into electric vehicles and fuel cells.

Basically, Mazda's Skyactiv is about making the reliable and affordable gasoline-powered car better than ever, with emissions that rival hybrids like the Prius and performance that rivals engines that are far less efficient. What's not to love?